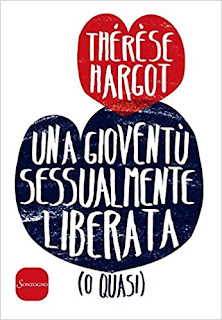 The essay by Therese Hargot,
lay observatory on affectivity (not completely) lost.


At the base, there is the question: What have we made of sexual liberation conquered in the sixties? This is the starting point of Therese Hargot, 33-year-old a Belgian sexologist, graduate in Philosophy and specialized in Social Sciences at the Sorbonne, in the investigation that led to the book “Youth Sexually Liberated (or Almost)”—the first book published in Italy by the therapist, who lives and teaches in Paris, where she shocked France with her essay. What emerged is a depiction, in some ways dramatic but real, of the sexuality of adults and especially of young people.
The Therese Hargot Tour made a stop in Rome on Women’s Day, and her book was presented in the Largo di Torre Argentina, in the presence of the Catholic journalist Constance Miriano and Alessandra Di Pietro, who calls herself “a journalist, feminist and biophilic.” The dialogue between these three women bore on the most diverse topics, from contraception to the pink quota, as well as on pornography and precocious sexuality to achieve gender equality, a mirage, also and above all in a period of apparent freedom for women. “In fact—said Hargot, whose point of view is purely secular—the revolution that supposedly took place thirty years ago led to obedience to another, in which women remain slaves.” Starting with the much-heralded hormonal contraception: “In the name of what should we take the risk of cardiovascular disease by introducing into our body a pill that is, among other things, also harmful to the environment, since it derives from processes of synthesis made in a lab?” Moreover, hormonal contraception and the resulting possibility to “program” motherhood have profoundly changed the psychological attitude of women toward pregnancy, so much so that “choosing to have a child implies expecting children to be perfect and mothers flawless. You could have had an abortion but you kept it, and so it’s your duty to be a good mother. You cannot say you’re tired, or that it is hard. If your child has a problem, the problem is yours, because you could have chosen not to bring it into the world; but you did want it. So, does contraception respond to the desires of today’s women? I think alternatives are needed.”