SOUTH SUDAN - The Comboni nuns are committed to education, integration and religious coexistence 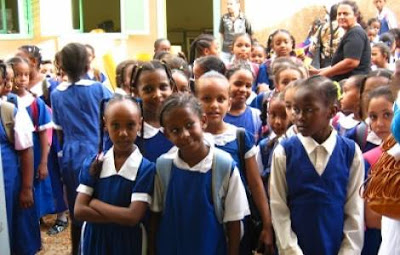 The future of the country is in the hands of the new generations and a good preparation, not only academic, is the basis for building a society that respects the common good. This is what Sister Freweini Ghebreab, a Comboni missionary, contact person of the Omdurman's "Comboni Girls School" project, explains in a note sent to Agenzia Fides. In the city, which is a few kilometers from Khartoum, there are many displaced families, who returned back to the North due to the unrest and conflicts in South Sudan.
The aim of the "Comboni Girls School" is to guarantee an integral education that confirms the dignity of the person and gives security in life, as well as preparing them at an academic level, so that they can better understand their role in society and in the family. The school is attended by schoolgirls and Christian and Muslim students, aged between 5 and 17, about 100 primary school students and 25 high school students are helped to pay the annual school tuition, uniform and teaching material. The Comboni missionary nuns, who have been carrying out this activity for almost 100 years, offer the possibility of education for girls in the city and suburbs, believing that education is a right for everyone, poor and rich.
Already in May 2017, the Comboni missionaries had launched the "Education in Omdurman" project to "foster culture and increase the dignity of a people in living the human and Christian values of freedom, justice and human dignity". The project is aimed at poor families who do not have the money to send their daughters to school. Because of the war in South Sudan, in fact, many Christian families are fleeing to the North, looking for a Christian school for their children. (FG/AP) (Agenzia FideS)