UK - CRISIS AT THE CHALKFACE 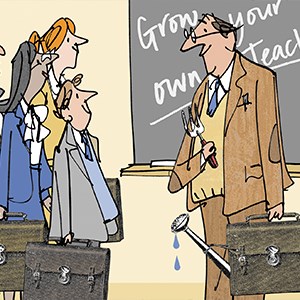 Teacher shortages are hitting Catholic schools hard, with some unable to recruit for long periods. Dorothy Lepkowska examines the problem and discovers one solution that may be paying dividends

The current crisis in teacher recruitment and retention in schools is a nationwide problem; the Government has failed to hit the recruitment levels for teacher training for the fifth year in a row and there is a shortage of trainee teachers in a number of subjects including maths, physics, design and technology, and computing. In Scotland, where the staff shortage in Catholic schools has been described as “acute”, teachers from Ireland are being targeted to fill the gaps.

The numbers leaving the sector have added to the pressures. Almost a third of the 24,100 newly qualified teachers who started jobs in English state schools in 2010 have left, according to Schools Minister Nick Gibb. The Government said teacher retention had been broadly stable for 20 years but education specialists warn that it is laying the foundations for a disastrous teaching shortage in years to come. Economics, concerns over discipline and burn-out among existing staff are some of the factors behind the poor retention rates.

For Catholic schools, there is an additional challenge. While teachers up to the level of assistant head do not need to be practising Catholics to teach in a Catholic school, they do need to be supportive and encouraging of the ethos. But senior leaders are expected to practise their faith, a requirement that can exacerbate the recruitment problem.

At the time of writing, there were 235 jobs advertised in Catholic schools in the United Kingdom in the TES (Times Educational Supplement), the foremost education newspaper in the country. Of these, 43 were senior leadership roles and 187 were in teaching and lecturing. Although it is not possible to identify how many are repeat advertisements for jobs, anecdotally we know that many will be.

Read: CRISIS AT THE CHALKFACE