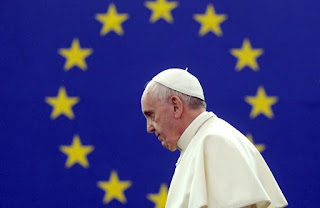 I am pleased to join you at the conclusion of your Dialogue on the theme (Re)Thinking Europe – a Christian Contribution to the Future of the European Project, sponsored by the Commission of the Bishops’ Conferences of the European Community (COMECE).  In a particular way I greet the President of the Commission, His Eminence Cardinal Reinhard Marx, and the Honourable Antonio Tajani, President of the European Parliament, and I thank them for their kind words.  To each of you I express my deep appreciation for your active contribution to this important discussion. Thank you!
In these days, your Dialogue has allowed for wide-ranging reflection on the future of Europe from a variety of viewpoints, thanks to the presence of leading figures from the ecclesial, political and academic sectors, and from civil society as a whole.  The young have been able to present their expectations and hopes, and to share them with their elders, while these in turn have drawn on their own reflections and experiences.  It is significant that this meeting was intended above all to be a dialogue, pursued in a spirit of openness and freedom, for the sake of mutual enrichment.  It has sought to shed light on the future path of Europe, the road that all of us are called to travel in surmounting present crises and facing challenges yet to come.
To speak of a Christian contribution to the future of the continent means, before all else, to consider our task, as Christians today, in these lands which have been so richly shaped by the faith down the centuries.  What is our responsibility at a time when the face of Europe is increasingly distinguished by a plurality of cultures and religions, while for many people Christianity is regarded as a thing of the past, both alien and irrelevant?
Person and community
In the twilight of the ancient world, as the glories of Rome fell into the ruins that still amaze us, and new peoples flooded across the borders of the Empire, one young man echoed anew the words of the Psalmist: “Who is the man that longs for life and desires to see good days?”[1]  By asking this question in the Prologue of his Rule, Saint Benedict pointed the people of his time, and ours as well, to a view of man radically different from that of classical Greco-Roman culture, and even more from the violent outlook typical of the invading barbarians.  Man is no longer simply a civis, a citizen endowed with privileges to be enjoyed at leisure; no longer a miles, a soldier serving the powers of the time; and above all, no longer a servus, a commodity bereft of freedom and destined solely for hard labour.
Saint Benedict was not concerned about social status, riches or power.  He appealed to the nature common to every human being, who, whatever his or her condition, longs for life and desires to see good days.  For Benedict, the important thing was not functions but persons, not adjectives but nouns rather.  This was one of the foundational values brought by Christianity: the sense of the person created in the image of God.  This principle led to the building of the monasteries, which in time would become the cradle of the human, cultural, religious and economic rebirth of the continent.
The first and perhaps the greatest contribution that Christians can make to today’s Europe is to remind her that she is not a mass of statistics or institutions, but is made up of people.  Sadly, we see how frequently issues get reduced to discussions about numbers. There are no citizens, only votes.  There are no migrants, only quotas.  There are no workers, only economic markers.  There are no poor, only thresholds of poverty.  The concrete reality of the human person is thus reduced to an abstract – and thus more comfortable and reassuring – principle.  The reason for this is clear: people have faces; they force us to assume a responsibility that is real, personal and effective.  Statistics, however useful and important, are about arguments; they are soulless.  They offer an alibi for not getting involved, because they never touch us in the flesh.
To acknowledge that others are persons means to value what unites us to them.  To be a person connects us with others; it makes us a community.  The second contribution that Christians can make to the future of Europe, then, is to help recover the sense of belonging to a community.  It is not by chance that the founders of the European project chose that very word to identify the new political subject coming into being.  Community is the greatest antidote to the forms of individualism typical of our times, to that widespread tendency in the West to see oneself and one’s life in isolation from others.  The concept of freedom is misunderstood and seen as if it were a right to be left alone, free from all bonds.  As a result, a deracinated society has grown up, lacking a sense of belonging and of its own past. And for me this is serious.......